By using this Heroic Expedition Tier List, players can easily understand the best heroes in the game at the moment.

This list is for the overall game performance, including both PvE and PvP. from early-game to current end-game phase.

Augusto is probably one of the best late game heroes you’ll ever see. Although if you’re in early game, you might not want to use him! Sometimes he’s a liability as the shared damage buff that he does can potentially kill off your weaker heroes. However, it just depends on what enemies you’re facing and how they’re dealing damage!

He could be a A or B tier hero in the early game but in the overall gameplay, he is definitely an SS-tier Hero!

He is above the rest, he stands alone and no one else competes!

Hercules it does some really amazing damage! He has a stun and counter attack, which are all really cool abilities that make him very useful!

He’s probably one of the top heroes you should go for and probably the first Dark hero you try to build! His copies are a little hard to get but you can farm them in the Prayer Pool!

Olaf is able to deal great damage and taunting everybody! There are at least two allies left on the battlefield. When he dies, he will resurrect as well.

At the end of every round, if a hero has a buff, he increases their armor level by one so there’s a lot of really cool interactions! He restores HP as well. He just has a lot of really good utilities. He is definitely a hero you should consider building at the very early game!

Alex gives a shield on his active to the entire team, that’s a very strong skill!

He has a chance to restore health when he gets hit as well. End of the round, if the hero is shielded, he’s going to increase his armor levels. There’s a lot of really cool things with him! Some people kind of bump him down a little bit on the tier list but I think overall he should still be in that very top tier – S tier.

Mery has abilities that deals damage to all enemies. She deals double damage to people above 75% HP, she has attack bonuses and a ton of cool things. She adds weakness to the enemies as well. Overall, she’s a very solid hero and definitely consider picking her up because she can she can really dish out the damage!

Karthus is a very very strong hero that deals tons of damage plus bonus true damage based on the current target hero’s HP. This type of ability really ends up doing tons of damage and also restores HP.

His basic attack increases the hero’s attack as well so even if he’s doing a basic, that just means he is powering up.

And then every 5% of HP he has, the more damage he can do. So he is a very strong hero! Definitely consider using him!

Sarah is essentially one of the coolest looking heroes in the Heroic Expedition. She is the dark version of Michelle. She’s gonna deal tons of damage attack to front row enemies and has a 30% chance to silence them. Silence is super strong in PvP battles.

Whenever an ally casts a skill, it will also deal 25% damage to the same target and has a chance to silence as well! Later in the game, she will have a chance to stun the silenced targets as well.

She is a CC powerhouse!

She has AoE-based healing and AoE damage as well. She has a chance to remove control effects, making her very good in both PvP and PvE battles, pretty much everything.

She doesn’t really have that many downsides.

Morgana summons a meteor shower against all enemies, dealing a lot of AoE damage. She has a chance to disarm the targets, which is a CC effect.

Whenever an enemy casts a skill, Morgana has a chance to cast forbidden retaliation, dealing damage equal to 50% of attack and reducing their attack so it’s a really cool synergy.

Before each round, she has a 15% chance to steal energy from debuffed enemies, which is a very unique and great skill. She can just steal all the energy to use her active skill over and over. Plus, it removes the energy from the enemies so they could use their skills much slower.

Musashi is a really cool warrior! He has the ability to deal damage to a single target with the lowest HP, causing the target to bleed then the skill also deals damage all target. He has the armor break buff and abilities that allow him to store HP when he kills an enemy. It’s not a great healing ability but it’s decent.

Saruman has the ability to deal damage to three random enemies and has a 30 chance to grant 3 random allies an arcane blessing, allowing them to have a guaranteed crit chance so it’s really good team builder. Whenever an ally lands a critical hit, he also gains energy so there’s a lot of crit synergy with this hero.

and if he is not incapacitated by any crowd control effects at the end of the round, he heals a random ally for 50%. He is like a mix of mage and support as he has a lot of utilities.

He is not the main carry of a team but he’s a great support to build around your team!

Aureus deals damage to all enemies and has a chance to entangle the enemies. For every entangled unit on the battlefield, he gains a shield equal to 6% of his max HP, which scales very well! He also has the ability to remove all control effects from him as well, which is super useful!At the beginning of each round, there’s a 10% chance to entangle enemies whose speed is lower, which is also very impressive.

He has a lot of good utilities. He is a great heroes for PvP but also good in PvE!

Matthew is probably one of the best healers in Heroic Expedition right now.

He has an ability to heal everybody in the team based on their HP, which is really solid! So even if he doesn’t have like a ton of attack, he’s still gonna be doing tons of healing to them. He has chances to increase healing on the allies.

When he dies, he has a heal for the entire team as well so you can do some pretty interesting shenanigans with him and Michelle where she can resurrect him when she finally drops below and then he can heal again.

Cynthia deals lots of damage to front row enemies with a 28% chance to entangle them. Entangle heroes are really strong in PvP! She also has the ability to grant all allies a shield based on her hp, which is really nice! And then her basic attack has a 15% chance going up all the way to 30% to feed energy to her allies, this is an excellent ability for any support hero!

Cassandra deals damage to three random enemies and gives White Deer Whisper, reducing the target’s Energy and burning the targets. At the end of each round, she also gives White Deer’s Blessing to allies, doing some damage, some energy feed, some HP, which are really cool interactions!

Margaret is a really good early game hero. She is kind of damage dealer with an innate ability to deal damage with her active and then heals herself for 35% of the damage dealt. Whenever she loses more than 25 of HP, she burns targets. And whenever a burning enemy dies, she will also heal! So she has a lot of sustain, she’s one of the heroes that’s good to build from the early game.

Sylvia does not have a ton of unique abilities but she has an aoe that deals all damage and gains 15 Block bonus! Her aoe damage is like the top in our Heroic Expedition tier list but the really great thing is upon blocking, she will heal herself based on her attack value! She will counter attack for 100% of her attack, which is a really cool ability! Whenever she is attacked, she reduces the block break rate by 8% percent and goes up as well!

Erica so erica is a very solid hero as well! She launches a flurry of attacks on an enemy with the lowest HP, dealing true damage based on the target’s max HP, which can scale very well! Upon taking fatal damages, she restores 20% of max hp and deals true damage equal to 50% of her attack to a random enemy anything, which is a very solid skill.

What are the best heroes in Heroic Expedition?

Hopefully, you can find out the best heroes in the game right now with the Heroic Expedition tier list above.

We are working on it to make it more accurate for every single stage of the game, from early, mid, to end game. So please stay tuned for more updates in the future! 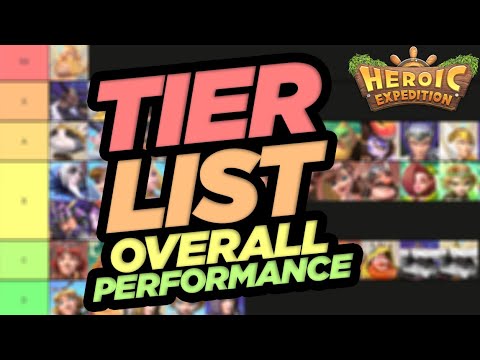 The final stop for all Heroic Expedition players!